BvS short : The Secret of the Awkward Bathtub Scene. (1300 words) 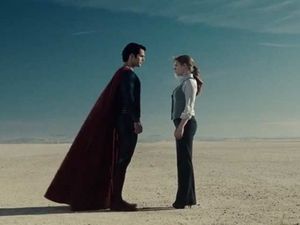 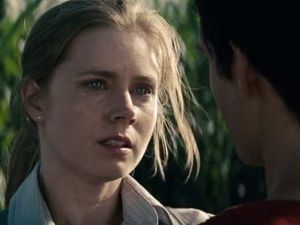 There are scenes in which Lois and Clark/Superman have chemistry.

I went to see Batman V Superman because of all the bad criticisms it was receiving which seemed disproportionately negative and frequently quite superficial. I’m sure that we can all agree that every month some good films are celebrated, some bad films are severely criticized and that some good movies are deemed bad and some bad movies are acclaimed. So, I was curious to see to which extend BvS was of the third category (good movies judged bad). I mean, Iron Man 2 is at 72% on rotten tomatoes and BvS at 28%, 2% above Green Lantern. Don’t tell me there isn’t something very seedy in this story. Seriously. How did that happen ?

I think that the awkward bathtub scene is quite representative of why Batman V Superman failed to please the crowd. We are watching a blockbuster movie which expects his audience to have a similar type of involvement and gaze as when they watch a weird independent one.

Usually, a scene like this would be a lot less explicit. Here Lois is entirely naked and although soapy water, reflections, foam (Edit: where did I see foam ?) and camera angles avoid revealing too much of her body, it still feels a bit indecent and insisting for a Superhero movie; and the cold lighting makes it too crude and realistic. At most, Clark could have found Lois wrapped in a colourful towel destined to be removed after the conversation before the scene ends. Or, he could have prepared the meal he arrived too late to prepare here while Lois is showering for example. Also, we would have expected the two characters to make obvious their attraction to each other and their tenderness and love, and the relief it represents to be there alive and in good health after what happened. We don’t expect a lot of intriguing elements in just one scene in a movie like that. For example here, the fact that Lois should hide the bullet she recovered from the book could be one, and let’s say, she could also reject Clark because what happened in Africa changed the dynamic between them. That would make two disruptive elements that would depart from the bland: “Ho, Clark I was so scared !” “Ho, Lois I was so scared too !” “I love you !” “I Love you !” They make love. Ellipsis. Clark is in bed, Lois walks around wrapped in bedcovers. “I’ve recovered a bullet from a book I took back from Africa.” “Mmm… we should have this analysed.” Tin tin tiiiin !

My point here is that Batman v Superman was too complex for its own good.

The awkwardness of the bathtub scene, however involuntary it might seem, is meaningful from the beginning to the end. Lois comes back from Africa and takes a bath; obviously to wash and relax after a long plane trip. But also, to try to clean up herself from the state of moral corruption she finds herself into (reporter greedy for a scoop and whose behaviour costed many people their lives). And finally, the water of the bath also represents her sexual arousal. It might sound a bit crude but that’s actually why directors use convoluted means to express that kind of ideas. Lois is aroused because Superman saved her and that’s how their sexuality works. We have to remember that basically Superman is the ultimate alpha male. He is the man whom no one can compare well with. Example: Jonathan Kent does not want Clark to reveal his power to the world because he knows that it would emasculate the whole male gender, same thing for Perry White when he congratulates Lois for dropping her investigation on Superman. Wallace Keefe is metaphorically emasculated by the fight in metropolis (Legs cut).

The thing is, Superman is only an idea, an illusion (“Superman was never real” states Clark before dumping Lois) which can trigger sensual fantasies and nothing more.

So, Lois is attracted to Superman because he is Super-man, and we have to remember that she is the one who started to call him that way (at least the “Super” part) but she is not attracted to Clark Kent. He doesn’t do anything for her. The reasons for the awkwardness of the scene are starting to emerge.

First thing first, Lois observes the bullet that she is not going to tell Clark about. Why ? Because it represents Superman’s fallibility. Lois is slowly learning that he is no god. Strangely enough we’re not told anything about her relationship with her father because a woman who looks for the perfect man is often trying to justify the fact that Daddy/god is not the most important man in her life anymore when she cannot simply state "well, I have a libido." So, the fact that Lois should be looking for a perfect man suggests that she is not that mature sexually.

Clark arrives too late to prepare diner. How could that man be late anywhere ? Lois came back from Africa by plane ! He came back by flying and managed to arrive after her ? This underlines that Clark wants to be Clark not Superman, and that he wishes Lois realised he is fallible and loved him in spite of it. He wants Lois to see him as a human being and a boyfriend. But she has had eyes only for Superman until that moment.

That kiss in Man of Steel is quite strange too. Partly because they've waited too long ? Like... Superman is an alien, maybe they don't kiss on Krypton. Maybe they just look at each other intensely.

During their conversation, it is twice question of the man’s love for Lois “The woman I love cannot be blown up or shot,” “I just don’t know if it is possible for you to love me and be you” but it is never question of Lois’ love for him… because she is not in love with him. And also, the “you” suggests that she considers Superman to be the real side of Clark Kent, not the contrary.

During the whole conversation Clark tries to win Lois but fails on all levels. They should jump on each other, she should be elated to see him, instead, she talks about Superman stuff even though she is naked in a bath in front of him. That’s very emasculating. She does not consider him as a man. And the whole point of the shots is to underline the discrepancy there is between the situation and their behaviours. She should cover herself if she wants to discuss something seriously, the way she acts it is as if Clark wasn't even a potential sex partner.

Also, when he tries to comfort her by placing a hand on her neck, she looks more displeased than anything else. The absence of alchemy between Cavill and Adams is an absence of alchemy between Lois and Clark. And when the man enters the bathtub without removing his clothes and trying to behave like a lover carried away by passion, it is cringeworthy to watch because he is forcing things. Lois hasn’t done anything to invite him to act that way and she is looking at him as if he were an impetuous child. Metaphorically (or literally) Clark is using Superman’s impact on Lois (sexual arousal) to have his way with her and it is quite creepy.

And how does the scene ends ? The glasses are removed and Lois is suddenly very "motivated."

So, this scene is clearly not a “feel good” moment and when we expect the tender and passionate reunion of two persons who love each other and have just brushed past a tragedy, it necessarily is disquieting. But when everything is said and done, it’s an excellent scene which takes into account a huge number of intelligent elements and dynamics of the story and I think it is very representative of the film in general. It has depth and it can be unsettling when you expect the meaning to be more accessible.