While analysing Jurassic Park an Idea came to me which I would have loved to be able to back up. Sadly, it is simply false.

What I wanted to spot was a clue that Henry Wu was truly responsible (or at least partly) for the whole disaster, not Dennis Nedry. Why so ?

Because the movie lets the spectators decide whether it’s John Hammond’s megalomania or Dennis’ betrayal that caused everything. As Dennis’ betrayal is caused by John’s megalomania it’s not hard to see that everything is on John. But it would have made things even more fascinating if it was hinted that Henry too had a lot of responsibility in the tragic story of the park. 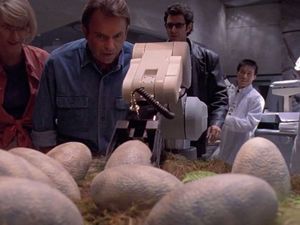 When Ellie, Alan, Ian and John visit the lab by surprise, Henry is observing the birth of a raptor when John had told him he wanted to witness the birth of every single dino. The incident doesn’t alarm or anger the old man very much but this scene could well have been: “Henry ! I told you I wanted to witness every birth you idiot ! What part of that request didn’t you understand !?! You’re fired !” 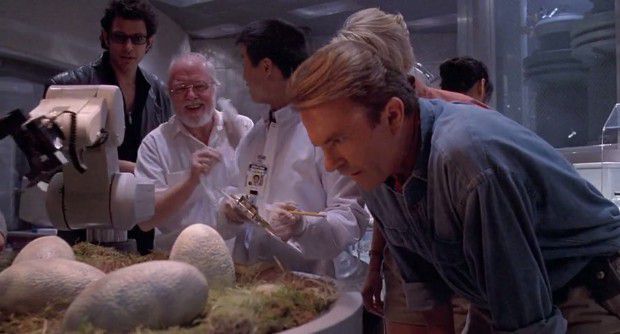 This is a very serious fault of Henry that we are made aware of. Maybe John remains nice because he has visitors and he doesn’t want them to realise that he doesn’t have any control over his scientists by losing his cool.

Anyway, Dennis Nedry and Henry Wu are John Hammond’s metaphorical sons. He neglects them both for his park and they both react accordingly:

Henry tries to become the thing that makes John desert them. John is obsessed with his power of creation; Henry becomes the guy who creates the dinos. The only way he can become an autonomous individual is by becoming better at it than his father, or by doing more and doing it in secret, without respecting his father’s orders.

Dennis, just like Henry, cannot escape the need to be essential to the park, because that’s the only way one can exist for Hammond, but he does it in a way that Hammond won’t be able to realise as long as he doesn’t give a shit about others.

Dennis’ constant asking for more money is a request for more attention and love, and an acknowledgment of his skills. And it is all the more humiliating that Hammond shouldn’t accept to give him what he asks for when the man keeps repeating “I spared no expense.” Each time he utters this sentence, he also says “Dennis Nedry is worthless.” 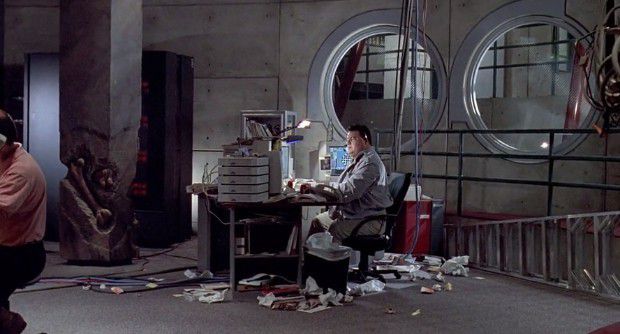 The sloppiness of the character is an accusation. It's the sloppiness of a little boy who wants his parents to understand that he is unhappy because they're not providing him with what he needs. His obesity is the result of his trying to compensate for his lack of love. And it is actually quite interesting that Hammond should made the park a pure consumerist place. It's all about the façade and seducing the audience. Nedry is the opposite. 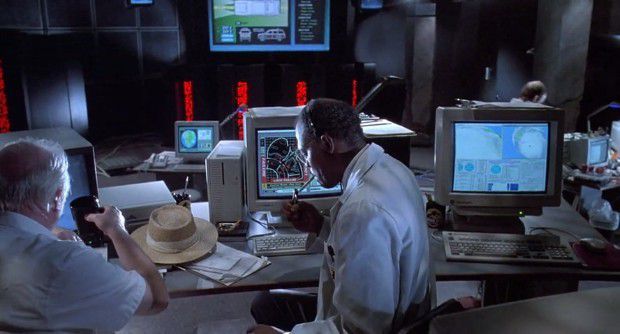 « well, Nedry said a few system would go off line didn’t he ? » John Hammond is not aware of the fact that he perfectly trusts Nedry. 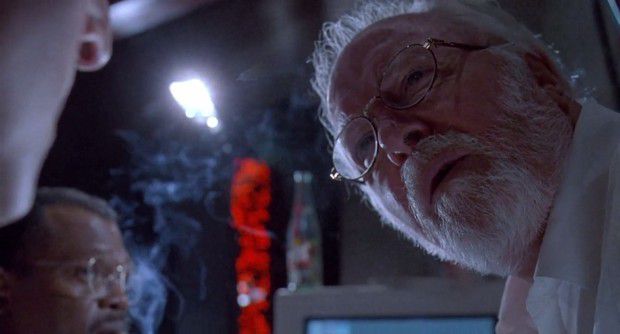 "Why the hell would he turns [fences] off ?" I don't know; maybe because he doesn't give a shit about your park and has his own personal agenda ? Time to land Mr. Hammond.

The movie makes it clear that Nedry is very skilled. Dennis describes his own abilities, Ray complains about them, John trusts him and relies on him without even realising… because Nedry does his job so well. "Pleeeeeease. I hate this hacker crap !" "Dennis, our lives are in your hands and you have butter fingers ?" Why did you make him so essential to the functionning of your park then ? 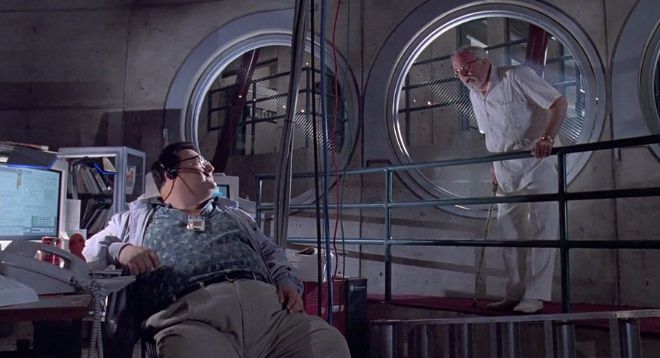 "I will not be drawn into another financial debate with you Dennis" Ah ok, so Dennis already told him he wasn't paid enough. So much for "spared no expense." "I do not blame people for their mistakes. But I do ask that they pay for them." Says the guy who has to prove his park is safe because one of his workers was killed by a dinosaur and who never has a word for the victim or his family. Nice double standard Hammond. Ah no ! It's not a double standard, he is only talking about what he asks of people, he doesn't imply that people should expect the same from him in return. 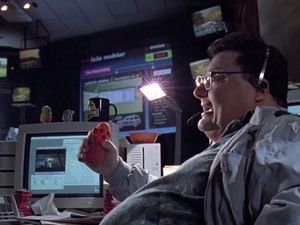 "Thanks dad" Notice the toy in his hand. Nedry is infantilized by Hammond who refuses to acknowledge the man's utility for the park, his skills and the legitimacy of his arguments. Why ? Because Hammond doesn't want to share the merit. It's not a coincidence that the object of betrayal should be associated with "becoming a man."

So, the whole betrayal story is Dennis eventually cracking. And if he never reach the boat, it’s because he doesn’t care.

Necessarily, Henry Wu reaches the same kind of extremity. “Necessarily” because, in this case, there is no reason why one son should reach the point where he betrays Hammond and not the other.

But Henry’s betrayal would not be to give the Dino DNA to another company. First it would be to engender dinos without John’s knowledge and this we witness. 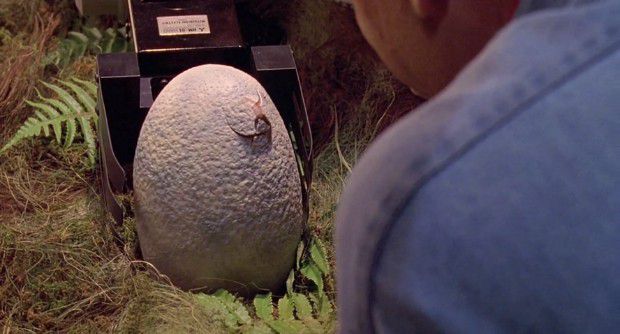 Did Henry intend to tell Hammond about this birth ? "Hey John, I know you asked me to tell you everytime there was a birth but I took the liberty not to and here's the list of the dinosaurs that were born without your knowledge. Can I have a pay rise ?"

Then it would be to steal dinos and create a park somewhere else. At some point I thought he could be responsible for The Lost World, but I think John Hammond explains it at the beginning of the movie. I’ll have to check but it makes the old man's attitude in Jurassic Park incoherent because he refuses to sacrifice the dinosaurs in order to assure the safety of Alan, Lex and Tim when he would have agreed if he already owned another island with all the species.

Henry’s evolution in Jurassic World is not breaking character, it’s on the contrary spot on, and it’s a blessing that this was made. Twenty years later, we are given the opportunity to see Henry’s park. It’s just so delicious. It’s as if Jurassic World was a bonus “scene” of Jurassic Park. Or a true sequel.

And to come back to what I was saying in the introduction, I would have been happy to spot an inconsistency somewhere that hints at Henry's "betrayal." The dino eggs that Alan finds are the closest thing I can find. He explains it with frog DNA but it could simply be Henry who manufactured some male dinosaurs. Sadly, there isn't enough elements to support this idea... appart from the fact that Alan is a fraud and wrong most of the time. Nedry’s encounter with a Dilophosaurus is quite interesting as it is written as a mirror of the T-Rex’ attack. “A mirror” in that it is completely reversed and serves as a hint at everything that we take for granted and that is wrong about the T-Rex scene. The most obvious part is the stick throwing. The T-Rex goes fetch because he is a giant intrigued Labrador whereas the Dilophosaurus is looking for food.

The seize ratio. We easily imagine that the T-Rex is here to devour because it is so huge. But the Dilophosaurus is clearly looking for a meal when he is very small. Its behaviour is here to make us realize how obvious it would be if the T-Rex was looking for food and also that seize doesn't mean "urge to devour." The Dilophosaurus enters the car to attack Nedry, he is not interested in the vehicle whatsoever whereas the T-rex’ attention is focussed on it.

I wish I could say that Dennis Nedry survived, after all the Dilophosaurus isn’t that big and he attacks him inside the car that which is actually a bad plan because it allows Dennis to defend himself even if blinded. But there is no reason why Nedry should survive this. He failed at getting his father’s attention, recognition and love and there is nothing waiting for him outside the island.

Of the two brothers, he is the rebel, that's why I was interested in writing this article, because Henry Wu is easily mistaken for a perfect good guy and Nedry for the evil loser. But Nedry is truly the one who is rebelling and fighting for an individuality against his father's megalomania whereas Henry has sold his soul a long time ago and is now only a flat image. Nedry wants to be treated like a human being in order to appreciate life, Henry is chasing chimeras and symbols in order to become a god, just like Hammond. Nedry is not impressed by the park, Henry will reproduce it.

Very nice article, another hint of Nedry's brilliance is when Mr. Hammond ask to call Nedry's people in Cambridge, that's a big University (I suppose he refers to the University) name, right? Glad to read your lines, I'm a little bit obsessed with this character that I'm interested in reading opinions about him.

Thanks for your comment. Nedry is a very good and peculiar character, there are reason to be interested in him. I forgot the line about Cambridge, I suppose it's his university, yes. I'll check and add something about it I think. Thanks again.