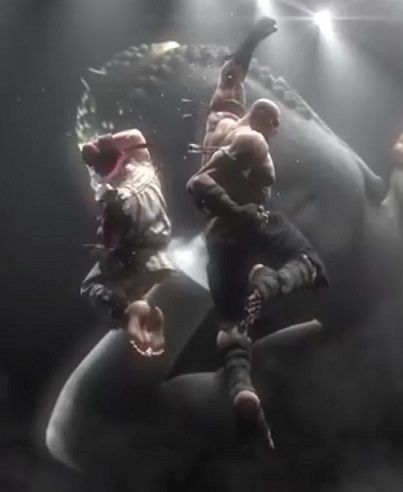 The trailer for Street Fighter V season 3 was just released and while watching it I couldn’t help but laugh at the umpteenth representation of Ryu’s uppercut in Sagat’s chest and I realised that I had never written anything about the fact that Ryu and Ken are in love with each other. It’s so obvious that I tend to forget that it’s not officially admitted (and it doesn’t need to be either).

While playing the story mode of Street Fighter V I was intrigued by how much everything was sexual in it but didn’t find the strength to write an article. It felt too long, too complex, too tiring a task to do (and not interesting enough).

As the new trailer convinced me to just do at least a little something, I rewatched the 1994 anime to gather some data and here we go.

If I really really want to have sex with a woman but she’s not interested, my frustration (psycho power) is going to feed M.Bison and he’s going to materialise. He might even manage to take control of me. That’s how it works. I even suspects The Force (From Star Wars I mean) to work in a similar way. (but I'll wait until I see The Last Jedi before I try to think about all this).

The story of Street Fighter II is the one of two young apprentices, one American the other Japanese, who fall in love with each other and don’t declare themselves before they eventually part ways (Asian Brokeback Moutain). Their martial art brought them together: Sho RYU KEN. I know it's irrelevent but I needed to say this, it's been bothering me since I was a child, why do Ryu and Ken have a special move that contains their names !?!

Ken finds a woman who feels that there’s something strange in their relationship.

Ken proposes to his girlfriend, she touches her necklace and declines (Ken doesn't satisfy her sexually and it gives her the feeling that she is only here for appearances). He says "it's fine" and thinks of old memories with Ryu.

Ryu roams around and lives like a hobo because he feels that he has to pay for his feelings. His obsession with training is the usual signifier of a need to control a body that asks for shameful things (Ex Machina, Commando, American Psycho etc…)

There are other people in the world of Street Fighter who repress their libido: Chun Li and Guile. Just like Ryu and Ken, Guile is a homosexual. The difference is that he doesn’t have a problem with it (In the Navy !). The sad part is that his lover, Nash, is dead. I don’t know what it means that Bison killed Nash. Did the soldier commit suicide because he couldn’t bear to be homosexual ? As for Chun-Li’s father, did he commit suicide because he was attracted to his daughter ? Have we ever heard anything about Chun-Li’s mother ? So, I suppose Chun-Li is stuck in her Electra complex, still in love with her dad and hence repressing her libido because it would direct her towards other men. In the animé Chun-Li flirts with Guile who is acceptable as a potential sex partner as he has the same goal as herself: killing Bison. But Guile is not interested obviously and Chun-Li ends up under a shower. Chun-Li is only too happy that Guile nicely proposes to "run her over" with his phallic sport car. Sadly, he is stopped by her vagina. She really tried everything she could. Poor Chun-Li desperate for sex. In the english version, she says: "Are you man enough to check out my other abilities ?"

The last hope she has to lose her virginity, the last fantasy she could possibly have, is to lose it to a beautiful rapist: Appears Vega, the faceless fighter who wears a glove with claws.

Ha, those killers who always find the time to compliment their female victims on their beauty. They would be real assholes if they attempted to kill them while telling them they're ugly too !

This is exactly the fantasy of a desperate virgin who thinks sex is wrong: nudity, anonymity (of the aggressor), total absence of responsibility (of the girl), beautiful evil sex partner. Sadly, she wins the fight and wakes up as naïve as an 8 years old at the hospital. If she had met Bison, I suppose he would have told her that he is her dad and that she is free to do whatever she wants with her body.

Guile couldn’t defeat Bison because he doesn’t feed the villain. Our beloved soldier is sad but he doesn’t repress his libido, he cannot fight Bison and Bison has no reason to fight him. And finally, Ken gets mind controlled and kicks Ryu’s ass as a revenge for how his friend has been avoiding him and for how his attraction for him is messing up his life. Ken and Ryu spend the effin’ movie thinking about each other at the most inappropriate or meaningful times. Their desire not to acknowledge their attraction for his other is ruining their lives. Actually I found their love story pretty moving. Their interactions as young fighters are quite tender and beautiful. Anyway, they don’t solve anything at the end by getting rid of Bison, which is why Chun-Li wakes up a child and the Evil vilain appears as a truck driver who chases Ryu.

If Vega incarnates the product of Chun-Li’s alienated libido. Who could incarnate the object of desire of an homosexual fighter like Ryu ? How would you create a fighter who is the embodiment of a penis ?

Well, obviously, he’d be all muscle, as a penis is a muscle. But any male character in street fighter corresponds to this criteria. He’d be tall, erect and slender, not large. He could be bald, so that his head is like the one of a penis. And actually to make the joke complete, he could be one-eyed.

And what would the repressed homosexual do to this embodiment of a penis ? How would you represent his desire to transform this penis into a vagina ? Well, maybe he could open the guy’s chest with an upward punch thus leaving a giant vertical crack.

I rest my case. 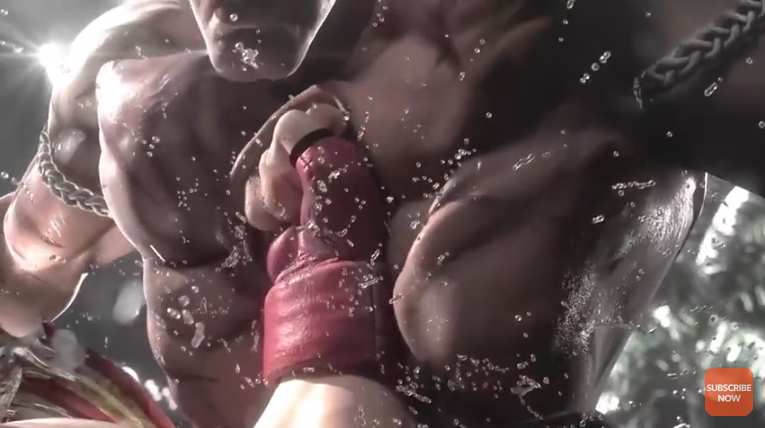 Don't ask me why his mouth ejaculates so much water.