The Lost World: It Wasn't Dinosaurs That Killed The Crew of the SS Venture (1400 words) Back in 1997 when I saw The Lost World in theatres I immediately felt extremely frustrated by the crash of the SS Venture into the docks of New York San Diego. As I knew that the movie ended on a scene with the T-Rex having a stroll in the city and was a big fan of the 1933 King Kong, I was curious to know how all this would be brought about. You can imagine my disappointment when I saw the dinosaur’s escape being explained by the unexplained slaughter of the entire crew of a boat and the stupid pushing of a button by a stupid man who stupidly pushes a button that opens the T-Rex’s cage. All of this made this conclusion to the story feel horribly tacked in.

It took me about eighteen years to feel like seeing the movie again. I appreciated it a lot more this second time and fortunately, my older age allowed me to understand what was going on with this boat.

I do not think the T-Rex or Raptors hypothesis truly need to be proven wrong in order to look into something different. Arguments against both ideas are actually part of the movie: The T-Rex is in her cage and everyone is dead. Yes, we can imagine that the last survivor was wounded and only found the strength to push the button before dying but come on, he still has the remote control in his hand. Ian specifically asks if there are any other dinos on the boat and obtains a “no” as an answer. Yes, the raptors could have jumped off the boat even if it is unlikely and stupid, but the question isn’t whether there is a possibility that dinosaurs killed the crew, but whether it makes sense as an element of the story.

Here, we’re told that it’s pointless to look into these directions. If the T-Rex or raptors were responsible for the carnage on the SS venture, why making it a secret ? Why making everything dumb and forced and convoluted and weird when they actually could make them pretty simple. There’s no need to put the T-Rex back in her cage. There’s no need for the entire crew to have been slaughtered thus leaving no witness to explain, and by the way, it’s not something believable in Jurassic Park to have the entire crew of a ship getting killed by a few dinos. How many death by T-Rex in JP1 ? One. How many deaths by raptors in JP1 ? Two. The dinos are not killing machines, they’re animals that will leave you alone if they’re not hungry and do not feel threatened. Also, it’s very unlikely that the crew of the boat was unarmed, and it’s very unlikely that they would have let themselves be slaughtered without giving a fight that would have left obvious traces.

Anyway, T-Rex or Raptors is just unbelievable and would be meaningless. What are we left with ? Pterodactylus ? Spinosaurus ? These would be even more meaningless.

We need something that is meaningful inside the plot of the movie, and both dinosaurs related hypothesis are not.

So, if it isn’t dinos that killed the crew of the SS venture… then we’re actually looking at... a whole bunch of murders made to look like a dino attack.

It’s a crazy idea in itself, but it’s even more stupid in that it would need a character with a motive, the financial possibilities and the lack of scruples to order such a mission.

Except that there is such a character: John Hammond. 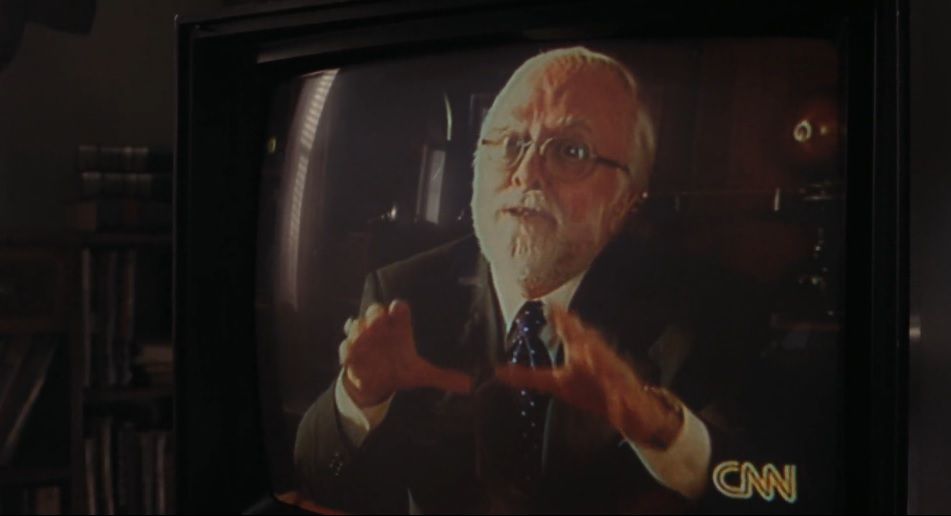 John Hammond created a park with dinosaurs because he wanted to offer something unbelievable, something magical that would be real to a fascinated audience. But desiring the magic of the promethean power is desiring to be godlike, and that’s exactly what Hammond wanted.

In the first JP he constantly repeats “I spared no expence.” This doesn’t mean that his goal was to make the park safe. He spared no expense when it comes to bringing dinosaurs back to life and buying quality ice-cream, that’s all. On the safety levels:

A worker gets killed by a raptor, Hammond doesn’t give a damn.

There’s only one qualified hunter/animal specialist on the island and two computer engineers one of whom complains about being underpaid.

Hammond pays Alan Grant a fortune to have him accept his invitation. He is cheating because he worries that both Gennaro and Malcolm aren’t going to green light the park. And it shouldn't be greenlit ! He also pays Grant and Sattler so that they’ll shut up about the park… and they accept. How noble of them.

Hammond uses his grand-children as test crew without their knowledge and shows no desire to kill the dinosaurs even when the kids’ lives are in very serious danger.

Muldoon, Nedry, Arnold, Gennaro all gets killed and still Hammond keeps denying what happened in his park, and even its existence. He destroys Ian Malcolm’s career in order to keep the park secret.

He destroys Lex and Tim’s lives by forcing them to keep their traumatic experience with dinosaurs secret.

He has a second island, Isla Sorna, on which there are dinosaurs and although he pretends that it precedes Isla Nublar, it’s very likely that it was actually built afterwards. It was a second try that was only possible because Hammond managed to have the first failed experiment remain a secret. And he’s already making a lot of victims and doesn’t care about it -fishermen, tourists- until the day the victim has rich parents.

So, I hope that it’s pretty obvious that Hammond is a crazy megalomaniacal man who doesn’t care about anybody’s life when it comes to getting what he wants.

Getting the entire crew of a boat murdered is just the final step in the direction he’s been heading towards since the beginning: intentionally killing people to reach his goal, truly "sparing no expense."

Now, why would he want the T-Rex to roam around freely in San Diego City ? At the beginning of The Lost World, we are made aware of a serious psychological evolution on his side. As Malcolm puts it he went from capitalist to naturalist in just four years, that which is a mistake: Hammond was never a true capitalist. It’s always been about his ego and the public’s admiration, not money. Now, instead of being the owner of a park of dinosaurs, he’ll be the benevolent father figure who lectures the world about how “dinosaurs need our absence” when he was the first to believe that they should be used for our entertainment. In order to create this mythology around him, he needs to keep the events of the first park secret, that is keeping Lex and Tim under control (that which he does), asking Alan and Ellie to keep their mouths shut, it’s done, and making sure that Ian Malcolm is not going to ruin everything by reappearing when the world learns the existence of live dinosaurs and reminding everybody of the crazy story he told the medias only a few years ago about an Island with dinosaurs.

So he calls Ian’s girlfriend and finds a way to send her on Isla Sorna, so that Ian too goes there. Then he gets them killed and… and there’s nobody to speak of the first Island anymore.

Unfortunately, both Sarah and Ian survive and the hunters even manage to catch a T-Rex. If Peter Ludlow manages to present the animal to the public without any incident, he will become the man who brought dinosaurs to humanity and Hammond will just appear as a grouchy old man when he’ll talk about leaving the dinos alone.

So he takes his phone and he calls his real team of mercenaries and gets everyone on the boat eradicated and “don’t forget to leave a severed hand hanging at the wheel so that it looks like a dinosaur attack.” "See, it cannot not be a dinosaur attack because human beings cannot do this !"

There’s one more element that explains why he could possibly go into that kind of murderous extremities: he is about to die himself and had Ingen taken away from him. It is thus his last chance to reach his goal. What’s a crew of sailors when you’ve already made dozens of victims indirectly, kids included ? 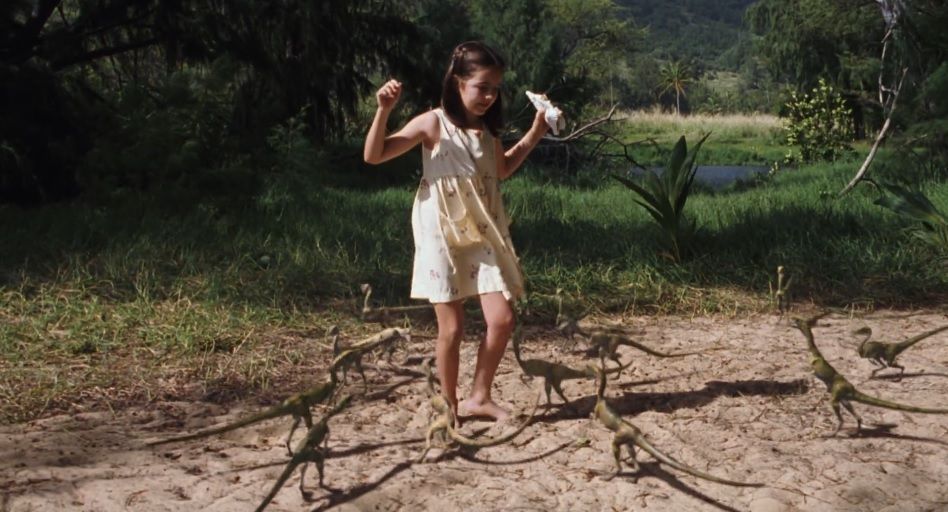 I swear, the little girl isn't dead, Hammond says it.

So yeah, the crew of the SS Venture is assassinated by a team of trained mercenaries enrolled by Hammond. Actually, it might well just be the team that we see obeying the nephew's order at the end of the movie.

Im glad there is a comment section here, so that I can make you aware how utterly ridiculous this idea is. It is plain cut set up to look like the t-rex done it, its not on the deck in its harness like it is meant to be and the crew managed to get it into the hold before sucumbing to wounds. There is also storyboards from the movie of a scene showing the trex doing all this but they decided not to put it into the movie.

"Im glad there is a comment section here, so that I can make you aware how utterly ridiculous this idea is."
Why the need for the pedantic BS ?
I don't know. As my idea is perfectly sound.
But clearly I hurt your feelings somewhere and you needed to vent your bitterness. That's good, very mature.
Nearly as mature as supporting your claim about what happens in the movie using things that were abandoned and not put in it. Ciao.