Disclaimer: maybe you shouldn’t read this article if vain, meaningless, dirty and cynical sex reassures you and makes you feel modern because sex is here going to be depicted as something beautiful, innocent, deep and meaningful and you might experience disgust, defense condescension or a little surge of anxiety while reading.

The critical reception that The Killing Joke has met stunned me a bit really. Not that the film is more than ok, simply, the Batgirl prologue was really, in my opinion, deeply misunderstood. And it happens so often that something deep, sensitive and subtle is mistaken for its exact opposite, and its exact opposite is mistaken for something deep and subtle that, at some point, it gets to you.

And actually, while I’m summing up all these opinions I realise that there is something touching about them. I suppose people liked Batgirl the way she was and they’re scared of seeing her getting soiled Game-of-thrones style... and they simply overreact or misinterpret what they see. Maybe. I don’t know. Maybe some of them just wanna look cool on the internet by operating another ritual sacrifice in the name of narcissism.

So, I’d like to just contradict the false assumptions that are made about it and describe it the way I perceive it.

First, Batgirl is not attracted to her dad. She is stuck in some sort of non-consummated incestuous and submissive relationship with him as Barbara (same name as his former wife), but she is trying to escape it as Batgirl. Therefore Batgirl’s desire for Batman isn’t incestuous or related to his age. It’s a coincidence, the story would be the same if Batman was younger. And Paris Franz is a young man now that I think.

Why do you think Batman's chest was removed from the animated version ?

Second, I don’t exactly see why a master/student relationship makes sexual attraction problematic. Actually, I think most master/student relationships incorporate an untold sexual aspect. Batgirl isn’t eleven years old and Batman is not officially required to give her grades so that she can obtain her vigilante degree, so where’s the problem? I think this discomfort at their mutual attraction is very naïve and stands on a “sleeping beauty” misconception of female sexuality. As if the teacher used his position to put himself in the place of the awakener and that the girl couldn’t resist (because you know, she has to resist otherwise euh... something bad happens?). When a woman is attracted to her teacher, she knows she is; and when she is not, she knows she is not. There is no magic responsibility on the side of the teacher (as long as there is no actual pressure of course). Plus, when Barbara herself describes her relationship with Batman as a teacher/student relationship to Reese, she compares him to a teacher of Yoga ! That's how it feels to be a vigilante for her, a yoga session ! Is yoga something that clouds your judgement and makes you do things you might regret with your teacher? Well... yeah but in a good way hi hi hi.

Third, it doesn’t belittle her involvement as a vigilante. Being a vigilante is the only thing that gives her life a meaning, her attraction for Batman is an extension of it, not the contrary. Batgirl's libido is a sign that she has finally managed to escape her perverted relationship with her dad. Libido is a sign of health, not a character trait. She would never have been attracted to any man if she hadn’t felt alive by becoming a vigilante. If she is less interested in chasing criminals after she and Batman had sex and he ignores her as if he now considered her a despicable slut, it simply is because she is a normal person. It is a normal reaction. They’ve been friends for three years, it’d be very sad if she could simply wave away an event of this importance between them. "Back to work" says Barbara with determination. Yes, but didn't it cost her a bit much ?

And fourth, of course Batgirl should be sexualized. She is a woman, not a table! If you liked her as an uptight librarian and thought it somehow made her more interesting than Catwoman or Harley Queen… well you’re wrong. Women should not be summed up to sexual activities of course, but summing them up to any other activity exclusively is as objectifying. What female characters should be in priority is complete individuals and Batgirl is one.

When Batman and Batgirl meet on the roof, she has already been experimenting with Paris Franz. 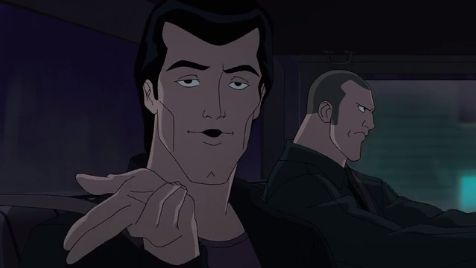 And onanism (Scavenger hunting), which Batman interrupted before Batgirl could have an orgasm. I believe. I'm not too sure. The death of the biggest boss in Gotham (Patriarchy) is certainly her discovery that she doesn't need a man to pleasure herself hence sexual autonomy and not sleeping beauty sexuality. And the appearance of erect (Vertical pan shot) Batman in the elevator might be her discovery that she wants him for her first time and not any other guy. I'm not too sure yet. 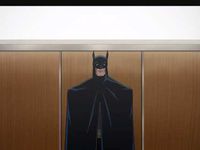 "I am the ultimate phallus ! And its cute little ears."

Quickly about Paris=> Batgirl is never (seriously) interested in him and she even eventually feels guilty for how she behaved towards him because she thought shallow feelings weren’t feelings. Paris is interested in the costume, in the vigilante and in the bad-ass girl. But he truly has feelings for this image and when he attacks Batman with a rocket launcher it is because he truly believes he stands a chance against him in the heart of Batgirl, who also only sees him as an image (Constant interactions on screens, TV, pictures, cameras, phones). When she witnesses him getting arrested on TV, shouting “love you Batgirl, I love you,” she knows that, as incapable he is of fully appreciating a woman like her, it is true for him and she thus used him unfairly when she actually appreciated his enthusiasm. (Enthusiasm that Batman is incapable of showing)

After Batgirl's last little adventure with Paris, Batman has become very jealous, very sad, and very incapable of telling her how much he is attracted to her and likes her. (Because Post Traumatic Disorder, loved ones killed in front of him and raised with love associated to guilt or fear, as we know).

On this roof he carries on what he’s been doing since the beginning of the story that is to say, criticizing Batgirl’s behaviour in the basest manner possible in order to make her lose her confidence and submit her. She is not competent enough, she is taking too many risks, she is blinded by vanity, she doesn’t realise how dangerous Franz is, she doesn’t understand anything, her suggestions are stupid etc…

And Batgirl carries on doing what she’s been doing since the beginning of the story that is calling the bullshit and doing exactly as she feels. 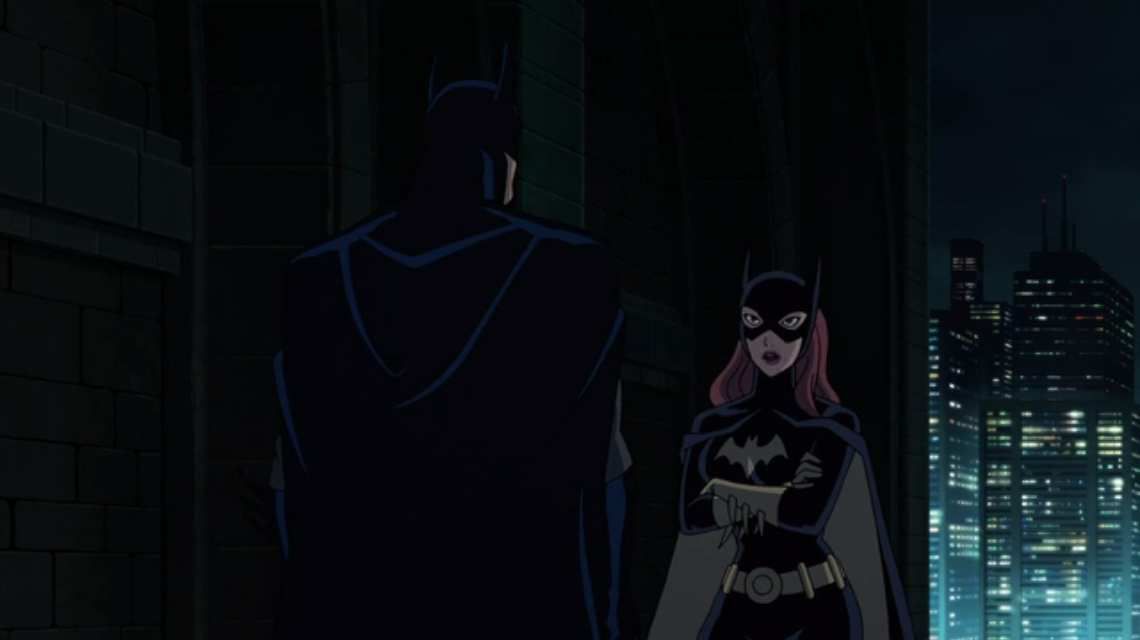 But in her last outing, she nearly got killed. Batman can believe he saved her, even though it’s not a hundred percent sure, and this time he goes full asshole.

Batman —“You let him play you (Scavenger hunt). He thinks he knows you like there is some kind of relationship going. He led you like a lapdog.” He perspires jealousy and is trying to have Batgirl feel stupid and obey him. But Batgirl won’t let him shame her:

Batman —“No, you were trying to prove something. You let your ego cloud your judgment ! You should have listened to ME !”

Batman does everything he can to break her, to make her lose her confidence, but Batgirl never let him escape and he goes so far into his hypocritical reasoning, which is there only to avoid telling her he likes her, that she eventually becomes so frustrated, hurt and angry that she attacks him physically.

He repels her with the same haughtiness. The same “I will not consider you.” And Batgirl ends up doing the crudest move to make him look at what he does not dare acknowledge… and she vainquishes.

The very famous technique of "Open your eyes ! What do you see ?" Borrowed from Hop Van Dyne in Ant-Man.

(I'm not sure whether I'm being clear here but her attack nearly requires that she press her sex against her opponent's face).

She climbs on top of him in order to immobilize him. As strange as it might seem, it is absolutely not illogical that Batgirl should want to hit Batman or submit him, simply because he is always running away physically and verbally. She can either abandon, but then she will never know the truth of the story, or she can force him to surrender. Suddenly she feels that Batman has an erection, which is actually a bit of a surprise as the guy always look as immovable as a granite rock. But an erection, an uncontrollable reaction, underlines well how much Batman is not letting anything surface of how he feels. Batgirl is so moved that her lower lip tremble and she can’t help answering this “behaviour” with a kiss.

I find this so beautiful. Because it is so honest, she is not acting prude or with condescension. She just takes it as the most natural and flattering thing in the world (which it is).

And it is not a coincidence that Batman embraces her after that. Men too are traumatized on that matter. He dares open up a bit once she’s shown that she didn’t consider it wrong. And also, of course, she is already kissing him.

Her hand slowly moves downward and Batman grabs her bottom. This should not be seen as Batman finally accepting to use her for his pleasure, as if he had been rejecting her because he thought having sex with her was taking advantage of a young and naïve and super hot girl and was now giving up morality and benevolence for some selfish sexual gratification, nor should it be perceived as an incompetent student desperately trying to get any kind of recognition.

What’s happening here specifically with this hand gesture is Batman finally acknowledging Batgirl as an individual. Nothing debasing for Batgirl in that gesture; quite the opposite really.

They’ve been fighting crime together for years, she is the best pupil he ever had, she is skilled, smart, enthusiastic, courageous and beautiful and something has grown between them very quickly and by not admitting it Batman is reducing her to a commodity; something nice and entertaining, an anti-depressant whose feelings and desires shouldn’t be taken seriously.

Batgirl reacts to Batman’s hand gesture on her butt by standing back up and removing her mask and top very seriously. I love the seriousness of this scene too. It’s not a joke, it’s not fun, it’s deep and meaningful.

Sadly, if she is ok as Barbara, Bruce remains as Batman. His problem still isn’t solved. Maybe Barbara should have noticed that, it’s going to have tragic consequences on her life.

So, this sex scene is extremely beautiful and it makes me sad that so many people should be blind to that fact. It is a scene that is understanding of the psyche of both characters and dares show them under an unusual light. And it makes The Killing Joke a truly tragic and horrible story contrary to the original comic which tried hard to shock but was more fascinating in the way it didn't inspire any emotion whatsoever.

I even think this is a part of what makes people think it is great. The fact that it should go that far and not inspire anything makes it feel otherly, as if Batman and Joker were gods playing amongst humans, something that indirectly flatters the readers too; whereas this new version displays a terrifyingly human fragility which reminds the reader of his own feebleness. But that's what makes it beautiful. Unconfessed titillation for the disoriented male reader in search of manliness VS Unbearable horror. (Similar intentions from the writers maybe, but different results).