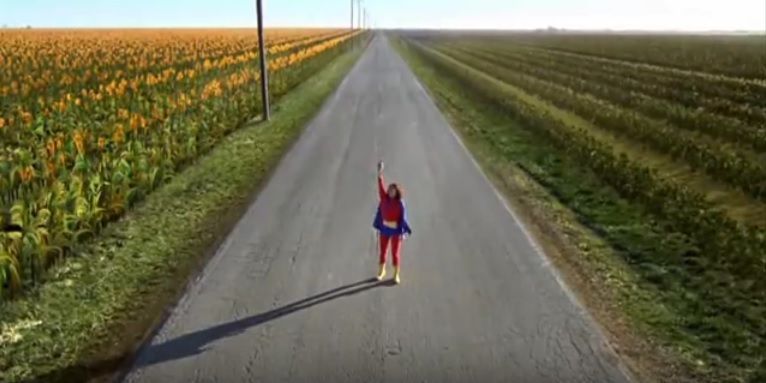 As I’ve said numerous times on this blog, whenever there’s a narrator, they’re lying. Rose in Titanic, Kiddo in Kill Bill, Melanie Ballard in Ghosts of Mars… they’re lying for specific reasons and modifying the story they tell us in order to hide a truth.

The Middle has a narrator, it’s Frankie, the mother of the Heck family. According to her temper, her priorities and her values, what do you think could make her lie to us ? Well, exactly that, her temper, her priorities and her values. Frankie thinks that as the mother of the family she is the one responsible for everything that goes wrong. She wants to be perceived as a failing superhero, but a superhero nonetheless. Not only that, but she also wants to get credit for anything that miraculously succeeds, hence depriving her children from the will to do so as their victories won’t be theirs in the end.

I’m already digging too deep but I was shocked to hear Mike speak about Sue (in the episode where we learn about Brick’s strange birth season 02 episode 07) on very positive terms “How can she be so good at everything, she’ll have to choose something eventually.” Sue Heck used to be good at everything. Why is she so mediocre now ?

I was also shocked when I saw the episode Mother's Day (I or II) in which Frankie obtains the right to have a day on her own as a gift and Mike, Sue, Axel and Brick spend the best day of their lives at an amusement park. That’s the kind of statement you cannot go back from. Without her, they are happy. They are fine, they manage. On her own, she doesn't know what to do with herself (and that's something that tells a lot about somebody in my opinion) As a mother, the first thing that Frankie is lying about is her importance.

As a narrator, the first thing about which Frankie is lying is the title of her show: The Middle. The Hecks would just be a somewhat average American family that encounters your common life ordeals: money, work, marriage, stupid kid, smart kid, a kid who can’t seem to fit anywhere or succeed at anything, feelings, family, consumer society, thanksgiving, Halloween, Christmas, school, gay boyfriend, stupid girlfriends, heartbreak, regular humiliations etc…

The lie would come from the fact that actually no the Hecks are not The Middle, they’re not average or common, there are real problems -and very serious ones with that- in this family and Frankie is trying to hide them because she wants to look like the good mother. She is trying very hard to tell you the story of her family in a way that makes it acceptable when the awful reality would stick out a mile if she wasn't allowed to narrate the story. "I've got some camping moves": she is interested. Frankie wants to have sex with Mike and that's all that matters to her.

And at the same time… they are the Middle. Because in our cultures the average family is sick, encounters real problems that are taboo, and which are kept hidden behind a veil of political correctness.

Frankie is a psychopath and having a mother like that is crushing. Again, Sue used to be good at everything and became the pathetic excuse for a human being that she is because Frankie is in competition with her and Sue wouldn’t dare humiliate her mother by being smarter, more beautiful, funnier, nicer etc… remember that episode where she runs with a broken leg in order to enter the cross country team ? (Last episode season 01) What happens at the end ? Frankie cheers her on => One of Sue’s crutches breaks, she dives on the finish line which happens not to be the finish line, it starts raining, nobody remembers her name anymore etc... any accomplishment made by Sue devalues her mother or is re-appropriated by her. Frankie's intervention aims at depreciating Sue, she is the one who wants Sue to be the girl who will always need a special support.

Same thing with her first race… Sue wants Frankie to be there to support her, to see her right to manage to do something be acknowledged, instead the mother is the one to make her give up. And yes, she wraps everything up in a nice story, but in the end, she fucked Sue up because she doesn’t want her daughter to succeed in anything. That’s how dark this show is, and life isn’t brighter. Most parents still pretend that having kids is an act of self-denial when they truly have them very selfishly and narcissistically for themselves.

Forced Family Fun (season 2, episode 1) is one of the first episodes that truly made me consider that the show could have a very dark edge. (But it's only a few episodes later that I decided that yeah, all of this as pretty dark).

Everybody went on Holydays in the neighbourhood except the Hecks that which makes Frankie look like a bad mother (in her opinion) and she thus decides that they should go too. Mike proposes camping and everybody is thus forced to go camping together in order to please mum.

We slowly learn through flashbacks that Mike and Frankie went camping for their honeymoon and that it was a catastrophe. She seems a lot more upset about it than he is. The catastrophe takes several masks during the episode. First, the honeymoon was ruined by rain, then it was because a friend of Mike very strangely appeared from nowhere, and finally, we learn that it was because Frankie kissed the man by mistake.

This evolution is important because it puts forward different level of secrecy. The kids are first told “it was the rain.” Mike was told “it was your annoying friend” until Frankie tells him (20 years later) that it was the fact that she kissed the guy by mistake that remains unbearable to her. It’s the same “trick” as with Brick’s strange birth story: when several different lies where told as the final truth, what tells you that this new truth isn’t a lie ? "Oh sure, so now you wanna keep it just us"

So, first thing -because more are coming as once you've peeked into the rabbit hole, everything collaspes-: Nicky and Frankie had sex in the tent. Twenty years and she is still angry over a kiss given by mistake !?! a kiss given to a stranger that she never saw again ? Sorry no. Twenty years of keeping it secret ? No.

Frankie and Nicky had sex under the tent. That’s a shock isn’t it ? How could Frankie mistake the broad shouldered and quiet Mike with a man like Nicky ? It’s already hard to believe that she kissed him by mistake in the first place. After everything that had happened during that evening it is unbelievable that she didn’t check the identity of the man who was lying beside her before kissing him. That’s why she blames Mike so much because she doesn’t want him to realise that she couldn’t have possibly made that mistake.

So… she wanted to kiss that annoying charmless guy ? Sorry… to have sex with that annoying charmless guy ? The thing is, Frankie is the NARRATOR and she doesn’t want us to guess what happened. That’s why she is so annoyed and reluctant in the flashbacks, whereas truly, Nicky appealed to her. The moments when she drinks his wine and eats his marshmallow are inaccurately depicted. Frankie makes herself look a hundred percent unamused when in reality Nicky managed to seduce her. 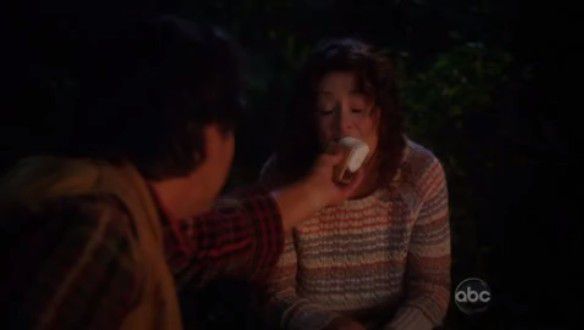 As much as Frankie’s “kiss by mistake” is laughably unbelievable… Mike’s “I can’t find the will to kick that intruding guy on my honeymoon because I want to make love to my wife” is sadly unbelievable too. Mike is homosexual. Nicky knows it and he is there to take revenge. I mean, did you really think this guy happened to pass by ? He is there on purpose, and his goal is to have sex with Mike’s wife on the day of their wedding as a revenge for not letting him enter the field during their decisive match (during which Mike was severely wounded but kept on playing against all logic) and stealing his minute of glory out of Nicky, just to stay with his friends. Nicky even goes as far as blaming Mike for his loneliness, stating that if he had been allowed on the field on that day, it would have changed his life (which I chose to consider believable in the context). 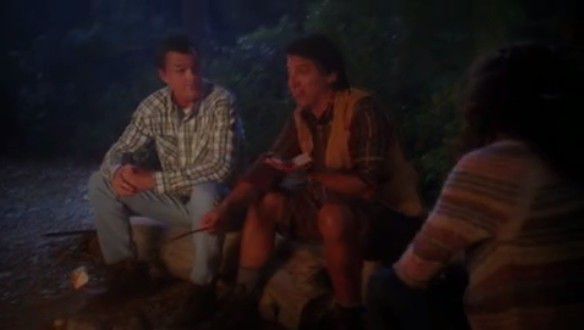 Because she kissed Nicky, Mike says he deserves the right to kiss another woman (a freebie). Frankie answers "Go for it" convinced that he has nobody in mind. Faithful ? Sure. Homosexual, too.

So, on the one hand you have Mike who remained on the field because he loved his friends and didn’t want this life to end.

And on the other hand, you have Nicky who loves women and whose life was ruined because of Mike’s untold homosexuality.

The revenge is perfect: ruining Mike’s life by having sex with his wife on the day of their wedding. Never will the wife be closer to realise that Mike is homosexual, and never will Mike be ready to hand her out to anybody else.

The tragic thing here is that, as he is homosexual, Mike is most certainly heading for an unhappy life with Frankie and being discovered on the day of their wedding might have been a blessing for both of them, in the long run. Nicky’s revenge consists in preventing that from happening… even if he proposes to Frankie before leaving the tent. "Mike owes me a wife, I shall take his as he most certainly doesn't want her." "you know, in an alternate universe you and I could have been very happy."

And that’s where things go even darker: Frankie regrets not having chosen Nicky. I don’t mean to be harsh on Mike, he’s great, but if he’s homosexual of course Frankie would have preferred marrying Nicky, everything else being equal.

She slept with Nicky because she was humiliated. Seriously, it was her wedding night. She was most certainly a virgin (even though she contradicts that idea later in the show), she couldn’t wait to make love and her husband copped out and left her alone with another man who was flirting with her five minutes before, in a tent in the middle of the night ? The message is clear.

And that’s where things go even darker: Axel isn’t Mike’s son. Nicky was great at football. Mike was meh. Axel is. Genes. Look at their faces. 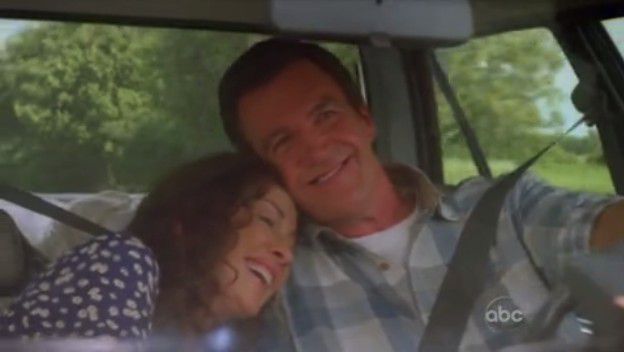 Axel isn’t Mike’s son. And Mike cannot not unconsciously be aware of it. How do you love the son of your rival ? How do you make this kid feel loved by you when he is an insult straight to your face. Can you imagine how f***ed up this situation is ?

And what about Frankie's weird love for her son whom she will end up "dating" in a episode before she realises it ?

And that’s where things go even darker: Sue and Axel aren’t exactly brothers and sisters and somewhere, deep inside, they know it… which means ? Yep.

The Middle is dark and serious. Frankie is a psychopath and all the little clashes that are told as part of normal family life actually hide very serious things that are gnawing on the characters and ruining their lives. Just like in reality.