The end of The Thing is ambiguous, obviously. But the last scene is a lot more than the simple question : “Who’s who ?”

It contains an answer: MacReady won.

Here are the elements that we shall use to discuss this topic:

The bottle, the flame-thrower and the chess game. The Chess game: At the beginning of the film, MacReady loses a game of chess against a computer which he destroys out of anger. Apart from the fact that a game of chess is very comparable to the fight they’re all going to carry out against the monster, it is very interesting to notice that just like he destroys the computer when he realises that he’s lost, MacReady destroys the base when all hope of killing the thing is lost too.

The Bottle: at the beginning of the film, Blair explains that everybody should cook his own food and drink from his own personal bottle because a simple cell of the monster can contaminate and assimilate an entire individual. (We see that he is very suspicious of cans and bottles when he is imprisoned in his small cabin until suddenly he is not anymore).

Blair decided to commit suicide in case he was assimilated by the thing and then changed his mind... for some reason. And now eats from cans with joy, wants to come back with the group and promises he'll be nice...

The Flame-thrower: if Childs was the thing, he could kill MacReady right at the beginning of the scene. But I’m not sure we ever see the monster attack with a weapon other than his own body.

So, here are two interpretations.

The least interesting one: Childs is the thing even if it is a bit strange that he should not attack MacReady.Then, the bottle trick only confirms MacReady’s doubts and he laughs somewhat bitterly because he finds himself in the company of his enemy until the end. But still, as everything is burning around them, they both are going to die. Symbolically, MacReady wins, he’s stop the monster’s invasion. There’s no run away dog this time.

The most interesting one: MacReady is the thing and when he passes the bottle to Childs, he contaminates the last human being aware of its existence. But it doesn’t make any difference anymore whether he is Childs or MacReady or Blair or anybody, because he is going to freeze. The monster that is defined by his ubiquity finds itself in a situation in which it doesn’t matter anymore whether he is one guy or the other. That’s the real victory. And when he laughs bitterly at the uselessness of his last move, contaminating Childs, he laughs with MacReady’s laugh. He is "incarnates" the guy who actually was ready to sacrifice himself to destroy the thing when, for example, the last two members of the group offered themselves to it hoping they would “survive” in a different from. So, the thing has assimilated MacReady, his whole personality, but in this personality there is the “fuck you, I’ll stop you even if I have to die to do so.” And thus, assimilating MacReady is not vanquishing him. The thing has assimilated our hero but is now isolated, stuck in “space,” the monster who is supposed to be everywhere. The sweat irony. 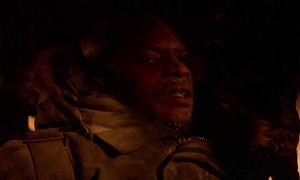 And from this point of view, MacReady could actually be contaminated from the start. But this I need to check whether it’s possible or not. He could be the reason why they all fail to stop the monster, because they trust him when actually he is the thing, but at the same time, because he is ready to sacrifice himself he manages to stop the monster anyway.