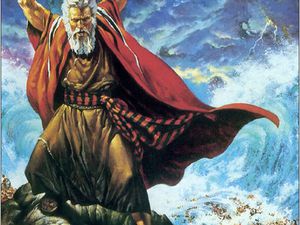 Is it obvious why ?

The reason why Schindler’s List made me want to rewatch The Ten Commandments is that it felt like the exact same story. And indeed it nearly is.

In The Ten Commandments the Hebrew people, slaves of the Egyptian empire, are saved by Moses, a messiah figure, a son of the Pharaoh, who will discover that truly he was adopted and a Hebrew and will side by them and be punished for it.

Schindler’s List is the story of the Jewish people, descendants of the Hebrews, slaves of the third Reich, who are saved by Schindler, a messiah figure, a german nazi who will side by them, put his life on the line and become hunted the way they were because of that.

What makes Schindler’s List even more of a sequel to The Ten Commandments is that although the story is very similar and uses similar elements, tropes and situations, its dynamics and resolutions represent an evolution over the first film. This “similar but different” is exactly the stuff of a sequel.

For example, at the end of The Ten Commandments, the Hebrews wander in the desert for forty years, more or less guided by Moses. At the end of Schindler’s List they are showed walking together to find a village and food but this time without their guide. There are not many movies that end with a homeless people travelling by foot and trying to reach a place where to start a new life.

The Hebrews and the Jews experience a very similar story but there is an evolution from one to the other. (I'm pretty convinced that the screenwriter did it on purpose).