In 2019 Bruce Lee is a legend arguably more than ever. He appears in movies (Green hornet, Ip Man), in video games (Street Fighter, Tekken), he always is referred to as some sort of godlike fighter, next to Chuck Norris, Jackie Chan, Jet Lee, Jean-Claude Van Damme, Stallone, Schwarzenegger. He made four movies (and a half).

I used to watch Enter the Dragon and Big Boss quite a lot as a kid. I liked action movies, and I liked these too. However, if I carried on watching things like Lethal Weapon or Die Hard as I was growing up, I became less and less interested in Bruce Lee’s stuff.

One day, I saw an interview of Nora Miao (She played his girlfriend in several movies) in which she explained how everybody wanted to see her date Bruce Lee and how it was out of the question. For example, she underlines that their kiss scene in Big Boss was the spectators’ favourite one, while she didn’t care for it (Meaning that she wasn’t interested in him). She explained that Bruce didn’t have the most likeable personality, maybe she said something like “he was a bit full of himself” I can’t remember. She also explained how she was strangely treated on the shooting of The Way of the Dragon in Rome where she was sent against her will and felt uneasy because a producer was constantly eying her and Bruce Lee “had to” pretend he was her boyfriend. Nora Miao about Bruce Lee's death: "Perhaps the fact that he left us so young, so unexpectedly and so suddenly made him more unforgettable. Sometimes, I find it very curious that after all this time, people still follow him."

She looked like a very reasonable and humble person and it was very easy to believe that Bruce Lee was most probably a bit of a prick whom such a nice woman wouldn’t be interested in.

Then I saw an interview of Jackie Chan explaining how Bruce had hit him very violently with a stick during the shooting of Enter the Dragon and then apologized heavily. I don’t know how to explain it but to me it felt like Jackie was saying very indirectly that Bruce Lee had hit him violently on purpose for the credibility of the scene. Nora Miao too underlines that Bruce truly “hit the flesh” during his fight scenes and that it was new at the time and made his films feel fresh and intense. Another fake compliment that she makes is that contrary to chinese movies of the time there was a clear cut between “good and evil” in Bruce Lee’s, that which sounds nice but most probably means that Lee wanted to be seen as the good guy who fights evil (ego problem) and that it made his movies over-simplistic.

Both Jackie and Nora praise Bruce Lee’s style as an actor and director and strength as a fighter without any restraint (even though these praises are very ambiguous), but they seldom say anything about him. I’ve had the feeling for quite some time now that Bruce Lee not only wasn’t a very likeable person, that which happens amongst actors and human beings, but that if he remains famous it’s because he was obsessed with his image and very skilfully crafted the idea of the godlike fighter that we have of him today; not that he wasn’t a great fighter, the question isn’t there, my point is that the values that he incarnates, as an actor, as an individual and as a character, are simply not that praise worthy. 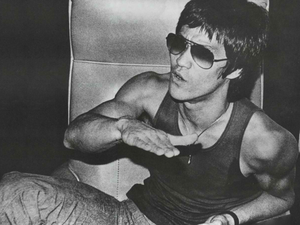 Also, there are rumours that the fighting style that made him popular was actually a secret one that already existed for a long time, that which is partially supported by the recent Ip Man movies that focus on Bruce’s master. So, my impression is that Bruce Lee was a talented man but also an opportunist guided by his ego and a showman.

Now, two days ago, I came across this Sammo Hung movie from 1978 strangely entitled Enter the Fat Dragon (it’s actually a parody of Bruce Lee’s The Way of the Dragon). It tells the story of a fat fan of Bruce Lee who works at a restaurant and tries to sort out every problem he comes across by kicking someone’s butt or destroying something. At the end of the movie, he just goes back taking care of his pigs in the countryside after having failed at everything he undertook.

The ending is a criticism of Lee’s screenplay. In most conflicts, physical violence is not a very good solution and Ah Lung ends up systematically making things worse, more, the final fight against three champions exists only due to him and his victory doesn’t change anything to the whole story.

The idea behind Enter the Fat Dragon, in itself,  is already a demystification of Lee’s persona as it shows us a stupid fat fan managing to perfectly imitate his style and in the opening credits with that. What the movie is telling us is that it’s not hard to emulate Bruce Lee and that the man wasn’t that exceptional. 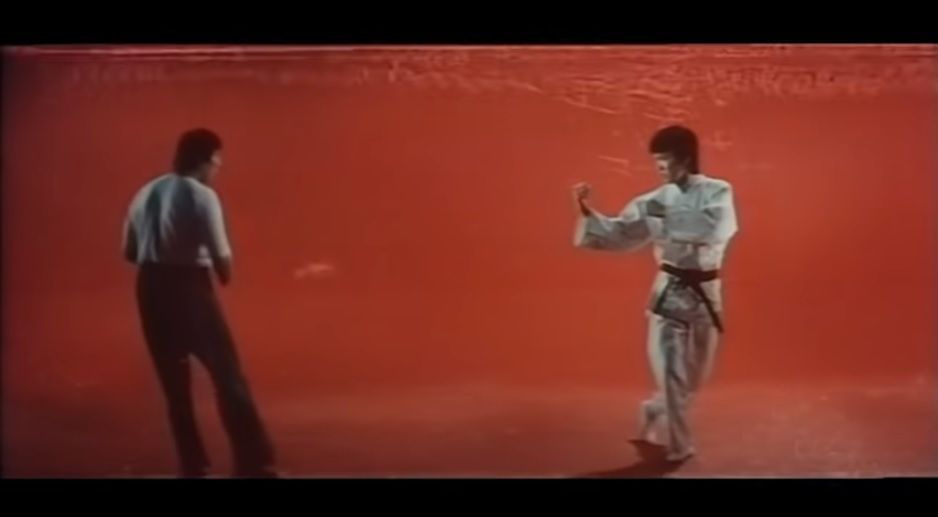 Also there’s a strange scene in which Ha Lung meets a Bruce Lee impersonator, so a man who impersonates Bruce Lee, and how does the guy behave ? He thinks he is stronger than anybody else and hits Ha Lung in the face when our hero criticises him. The Bruce Lee impersonator isn't recognised when fighting but because of his shades and his star-like attitude.

Then there’s the moment when Ha Lung wants to buy a pair of glasses in order to look like his admired star, but there’s a misunderstanding and the shopkeeper thinks his customer wants to look like a pig. So, you can mistake Bruce Lee for a Pig ? I believe the story of Enter the Fat Dragon to be the one of a missed coming of age. Ha Lung is growing up and wants to find a girlfriend. Because he is the Chinese equivalent of a redneck, he doesn’t feel like he is a very attractive guy. Also, he is constantly reminded by every single person around him that he is fat. His admiration for Bruce Lee is the result of his suppressed desire to be considered “a man.” He feels too ridiculous to even think of flirting with a woman and just focus on emulating his idol in hope that he’ll manage to radiate some charisma.

The funny aspect of the dynamic is that there’s a female character who fancies Ha Lung from the second she meets him. During the whole movie Baat Je will be artificially involved in the plot. First Ha Lung and she takes the same bus, Usually the bus scene would be Ha Lung getting slapped in the face after having unvolontarily groped a woman.

Instead, the woman grabs what she thinks is Ha Lung's erect penis and pretends not to realise, because she's fine with it.

Then, when Ha Lung tells her that he is getting off, she throws him a lifeline, she's hoping he is going to ask for her number or to ask her for a drink.

And get scared when she realises that she was touching his bananas... that which doesn't make much sense.

then she comes and has a meal at the restaurant where he works,

once he’s fired from this job, he goes and work at the restaurant where she works, then she tries to cover him when he destroys a car and finally,

she’ll get abducted by the main villain for no other reason than his being in love with her.

Ha Lung kicks the bad guys' butts, but do not take the pain to free her. The story persistently avoids making her Ha Lung’s love interest that which would be a flaw if we weren’t in front of a parody.

The point of this pointless non-narrative arc is to underline that Ha Lung’s imitation of Bruce Lee leads him nowhere. He could have had the girl from the start and didn’t need to show off, more, his obsession with showing off leads him to extreme of stupid fighting and at the end of the day, the woman just went out of the picture.

He would solve everything by dating her, by being a real man.

There are officially no couple on this image and Ha Lung isn't holding the right girl's arm.

In the final scene of the movie, Ha Lung tries to help someone who he thinks is about to commit suicide. He ends up diving in the sea next to a fisherman and ridiculing himself again. This scene is a very smart parody of the one we would have had if his heroic actions had been justified at some point of the story: the woman crying because Ha Lung is leaving.

Truly the person who is thinking of suicide is him. He failed and is now going back home. Maybe this dive into the water finally cleared his mind, he realised that what he wanted was a woman to love him and that’s all. Ocean, rain, water is often used as female arousal and so here, Ha Lung is given the answer to his desperate search while being put back in his place (he takes himself too seriously).

And so, the message of the movie would be quite pertinent and lucid: the admiration for Bruce Lee is actually a desperate search for the acknowledgment of one’s masculinity, and the best way to have your masculinity acknowledged is always to accept the love of the woman who already fancies you. The coliseum scene too is nicely parodied.

Bruce Lee makes his audience believe that standing up to criminality through martial arts can bring you to a glorious and epic hand-to-hand fight to the death with a great fighter.

Sammo Hung transforms this into a fight in a cruddy depot where he has to ask his adversaries not to all attack at the same time because yeah, the criminals did think about hiring ENOUGH henchmen to beat up his ass. They weren’t looking for something beautiful and grandiose and fair. Sammo Hung mocks Bruce Lee’s idea by making his enemies accept to fight him one by one otherwise they’re truly “evil.”