I was quite unsettled when watching Godzilla II by the fact that the movie didn’t show or even give a hint at how Andrew Russel, the son of the two main characters, dies.

If you take a second to think about it, this never happens. Whenever a main character is traumatized by the death of a loved one, the audience always get to see what happened, at least partially, there’s always enough information for us to understand. 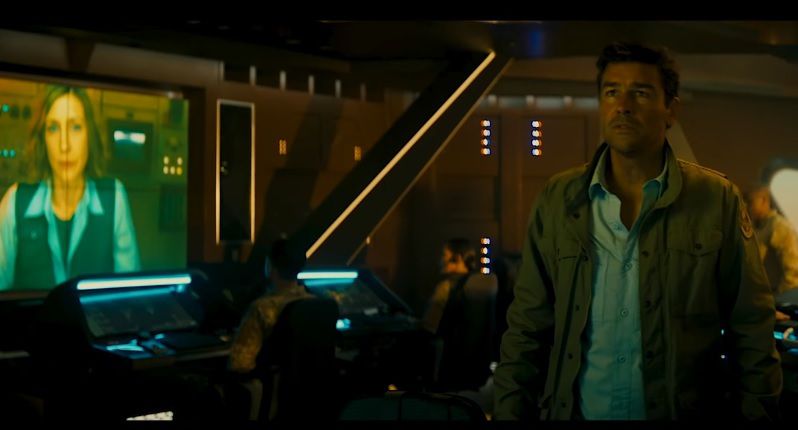 So, very logically, we’re going to imagine that Andrew died during the collapse of a building or in an explosion. The problem is that the movie allows us to see the complete family watching Godzilla pass by (maybe even enter the bay). Andrew was fine when the giant animal left. On the level of writing, the flashback that should show us how the kid died actually transforms his death into a mystery.

The friend with whom I went kept on repeating “The son’s not dead, the son’s not dead” and I too was expecting Andrew to reappear at some point, crippled or disfigured, but he never does.

This picture will be symbolically broken by Madison when she eventually considers her family finished. But what is that supposed to mean when Andrew has already been dead for years ? Wasn't the family already done for before that moment ?

2 things: 1-When the Godzilla team explores an ancient underwater city, a man makes a comment about his desire to have children as a reason not to be exposed to radiations. 2-When Mothra heals Godzilla, a character has a weird line about symbiosis not being that rare in nature.

Mothra and Godzilla have a symbiotic relationship. It’s Godzilla’s existence that triggers Mothra’s, through the creation of an ecological niche and the influence of the giant’s radiations. Maybe Godzilla always has a “healer” around. And Godzilla actually, most certainly exist because of the imbalance that humans created. If humans weren’t that clumsy and disoriented, Godzilla wouldn’t need to exist in order to bring balance.

Now, at the beginning of the movie, we’re given to see the birth of Mothra as a giant larva. Later on it’ll change into a beautiful butterfly. Emma and Madison are there to witness the first event as Emma has created a tool that allows communication with the Kaijus.

During this birth scene, Emma behaves strangely in that she brings her daughter to a very dangerous place, forces her to witness everything that happens and puts her life in danger without any hesitation only in order to be able to chat with the monster. Madison cannot not see that her mother doesn’t care about making her an orphan.

We’re very accustomed to the stereotypes of the crazy scientist who takes crazy risks, The Fly springs to mind, but even in that movie the “crazy” risk is taken for a personal reason: the scientist wants to seduce a woman with the result of his experiment. In Godzilla II, the reason behind Emma losing her mind over Mothra is that Mothra isn’t only a big monster and a fascinating experiment for her: it’s her son. It's Andrew.

The kid was “contaminated” by Godzilla’s special brand of radiations, formed a chrysalis and shapeshifted into Mothra. That’s why Emma isn’t afraid of the animal even after it’s killed about ten persons. That’s why Madison isn’t afraid of the monster even after it’s killed about ten persons in front of her very eyes one minute earlier. That’s also why Emma is so eager to protect that new Titan, and why she wants to communicate with it too.

Once one has accepted that Mothra is actually Andrew, they can start looking into the real dynamics that underlie the family story:

Emma cannot accept the death of her son and thus embraces what happened to him. She wants the Titans to rule the earth because he is one of them.

The Monster Zero twist is quite interesting in that it is a good example of the fact that a twist that isn’t very interesting at first glance can increase in quality if we discover that it actually had a less obvious reason to be, a somewhat hidden meaning.

We all know that Ghidorah will be a “bad guy” from the minute it appears on screen, so when Emma realizes that the monster is not there to bring balance, it doesn’t make a big difference for us, she just looks stupider. In reality though, her behaviour is more coherent than it seems (if perfectly morbid). She thought Ghidorah and Godzilla were meant to rule together and both needed “a satellite animal.” It’s not entirely wrong, Ghidorah is accompanied by Rodan.

Emma wanted her daughter Madison to become "Ghidorah’s Mothra" and the twist that is Ghidorah’s evilness brings her to accept the death of her son and realise that she has a daughter.

Sadly, it’s too late and Madison tries to make her mother’s prophecy happen. She steals the Orca (the tool that allows communication with the Titans) and calls Ghidorah. She wants to be chosen, alienated, and transformed.

Seen from this point of view, the movie’s plot becomes a lot more interesting in that it instils meaning in many more behaviours and dialogues. And euh… that’s cool. I mean, I was annoyed by the criticisms that the movie received because the first one was attacked for “not enough monster action” when it didn’t need more, had plenty of “high-scale” impressive scenes beyond the fights, was great and the fights were all the more memorable that they weren’t numerous. Now the second is accused of being “too much action not enough story” when there aren’t that many fights, they do not feel tacked in at all and the story is fine, its dynamics are just a bit too obscure.

Anyway. This MonsterVerse had a good run, if Godzilla VS Kong is a good movie, it’ll be the fourth one and four good movies in a franchise is already quite a lot. I don’t know what they could possibly invent afterwards in order to keep things going.

That’s something critics do not seem to realise: the story of King of Monsters is good, it means something. It’s not told in an incredibly enthralling way, sure, but it still is a good story. Godzilla 2 is at 40% on Rotten Tomatoes.