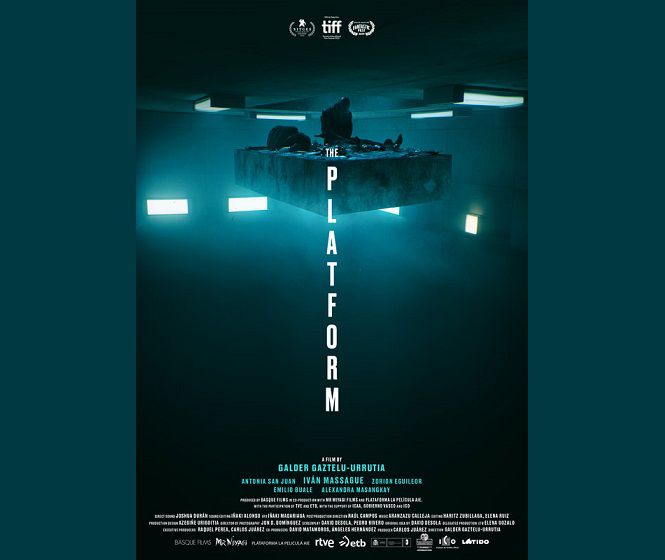 My “Alternative readings” are not just my personal opinions on movies. They’re the result of attempts at finding coherence where it lies, and because of this, I can discover things that displease me, with which I disagree or that I find incorrect when it comes to their representation of the dynamics that rule our lives. It doesn’t often happen, and most of the time when it does I don’t feel like writing an article about it.

But sometimes I can write the article anyway, and that’s what’s going to happen here with The Platform. I thought this movie was a fine entertainer and a funny puzzle but when it comes to the philosophal/political allegory, I find it over-simplistic, complacent and even problematically inaccurate.

And so, let’s just talk about the “Alternative reading” that isn’t even one really, as spectators aren’t given a more obvious interpretation than the “secret one" that I’m going to develop here.

Throughout the movie, we’re lead to wonder how the food could be distributed in a way that would allow everybody to eat.

First we can witness that the “top to bottom” approach leads to very violent behaviors, murders, cannibalism and to deaths by starvation.

All this, we obviously want to avoid; the murderous selfishness.

Appears Gorèng, the socialist who believes in equity and will oppose the system by creating a “food police” that is supposed to distribute the meals to the people who are starving first.

Don’t ask me why he is stupid enough to use violence in order to deprive the first fifty levels of their meals instead of intelligently rationing them.

His attempt fails and the story ends with the little girl of the deepest level obtaining an unexpected spotless Pana Cotta and being sent to the top, to the engineers of this nightmarish place.

And so, the perception of all this that I find to be most probable and meaningful, is that this place is a rehabilitation centre (it's also the way our prisons can be perceived).

Trimagasi will explain at some point that he is guilty of an accidental killing and has to stay in the facility for one year. He had the choice between the Asylum and the Pit.

Obviously, we’re in an authoritarian society that resorts to very violent means in order to keep its citizens in line. I suppose that the Asylum means being considered innocent but inapt to live in society because mentally ill, whereas the Pit is a place where you’re considered still adapted enough to be rehabilitated but held more responsible for your crime.

Gorèng will get a degree for his staying there for six months, and really seems afraid of not being "admitted." Also, he doesn’t even know what to expect from the place as Trimagasi has to explain everything to him. From the outside, "the Pit" is a mysterious place where people are sent for various reasons as a punishment, but also where you can ask to be sent in order to obtain a distinction. By going there, you prove something to society; hence, the idea that it’s a rehabilitation centre.

A few elements can help answer these questions :

- Each prisoner is asked what their favorite meal is before they enter the facility.

- Even though the living conditions are horrendous in the prison and people starve, we know that numerous meals are prepared and this with the utmost care as we’re given to see what happens in the kitchens. - A staff member is imprisoned and will tell Gorèng that there actually is enough food for everybody if people share it properly.

- Stocking food is forbidden and results in being burnt alive or frozen to death. However, at the end of the movie, a desert is kept by the heroes and the action doesn’t trigger their execution.

- Gorèng says his favourite meal is snails. Strangely enough, Trimagasi will call him “My escargot.” And we’ll see Gorèng arrange snails on several plates when he tries to ration the food for the inmates of the inferior level. => The meals on the platform are each inmate favorite meal cooked by the best cooks. And so, here's my interpretation:

The goal of the facility is to discipline people, to teach them to only take what they designated as what they wanted and not take everything they can. If they only grabbed the meal they asked for, their cell wouldn’t start burning or freezing and everybody would have something to eat. Of course, in the long run, constantly eating the same food is a stupid thing to do, so it’s imaginable that if they did eat their specific meal, they would be sent to sleep and would wake up free and with a nice diploma.

Trimagasi calls Gorèng “my snail” because he’s noticed that snails were the new meal on the platform when Gorèng was the new prisoner. The Pana Cotta is the little girl’s favorite meal and that's the reason why keeping it on her level doesn't trigger any variation of temperature.

The director, Galder Gaztelu-Urrutia, says the film's key message is that "humanity will have to move towards the fair distribution of wealth, with an exploration of the importance of individual initiative in driving political change that critiques both capitalism and "socialist systems". (Taken from Wikipedia)

This statement goes in the direction of my interpretation. The inmates are supposed to learn discipline, to learn to abandon their selfishness and aim at a fairer distribution of the food inside the structure.

As I was saying above, I do not like this way of representing things and I think that the movie fails as a political warning or commentary.

As a warning: if it's talking about a potential future in which humanity is confronted to problems of overpopulation and lack of food for example.

As a Commentary: if it's talking about our present alienated psychologies and failing political systems.

But that's another story.