I was quite disappointed when I watched Witness (Peter Weir, 1985) for the second time in my life last night because I realised that AGAIN, there was a homosexual subtext in the movie.

I’m actually starting to think that I should look a bit further into these subtexts because they can’t be just that. They must be the metaphor of something else, like the love of patriarchy for example, the love of order and submission. I don’t know, but it can't just be dull homosexuality.

Anyway, I’m writing this article to talk about something a little bit more interesting than a hidden sexual orientation: a MURDER. Yeaaaaah !

The murder that Samuel witnesses isn’t the one of a cop.

The Amish community is associated with innocence in the film, and the city is guilt. Heaven, hell. Morality, immorality.

Of course, these oppositions aren’t valid. Human beings are the same whether they’d be in the city or in the Amish community. They deal with their weaknesses in a different way and their environment is different, but they’re still made of the same flesh.

I was expecting the movie to underline this fact towards its ending but was agreeably surprised to see that the Amish community is never naively revered.

The murder that Samuel truly witnesses is the one of his father (God ?). Daniel and Rachel are both victims of the Amish community’s rigid rules. Daniel is homosexual and fated to marry a woman. Rachel is a woman with a strong temper and sexuality who should act like she is an idiot and a saint. They incarnate the taboos of a patriarchal society (men have feelings, women are strong and love sex). In that, the Amish community actually resembles the conservative capitalist society.

I’m sure that Rachel’s husband was an emasculated idiot who drove her crazy, or at least he was an idiot who suffocated her and did not satisfy her sexual urges (it’s always dangerous not to satisfy the sexual urges of a woman). That’s why she decides to kill him and marry Daniel, an act which would allow them both to find a situation in which they are free to do what they want with themselves. They know each other’s secret. In many ways, they are starting a rebellion against the Amish community. On the day of the burial, Daniel behaves as if he was in his house. The women seem to be responsible of the food, but he takes the pain to transport a huge roasted turkey and then rubs his hand contentedly as if he did not consider himself as a guest. 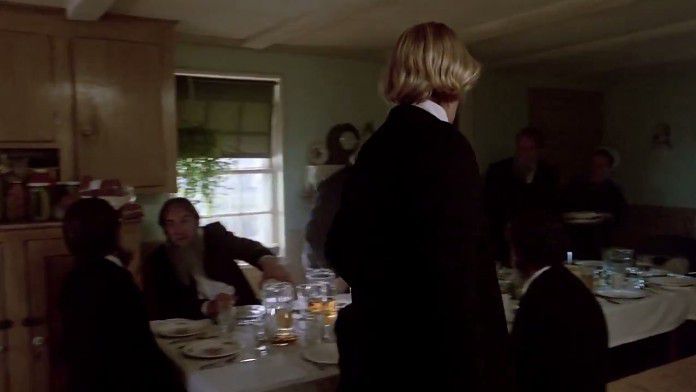 He then checks if everything is alright for the actual guests. 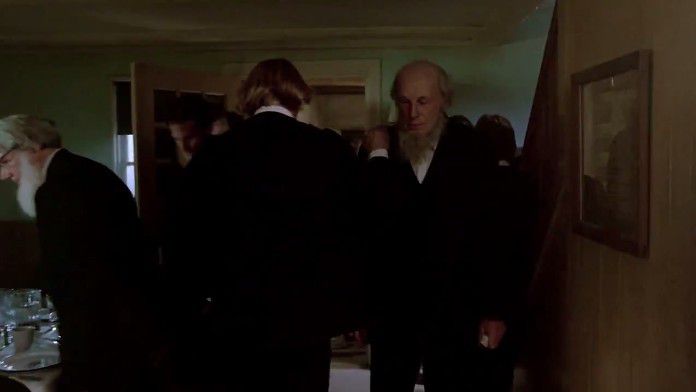 Allows himself a very ambiguous intimate gesture towards the father of the new widow. "I share your grief" "I am now the master here." Takes his hat which he had hanged to the bannister of the stairs. 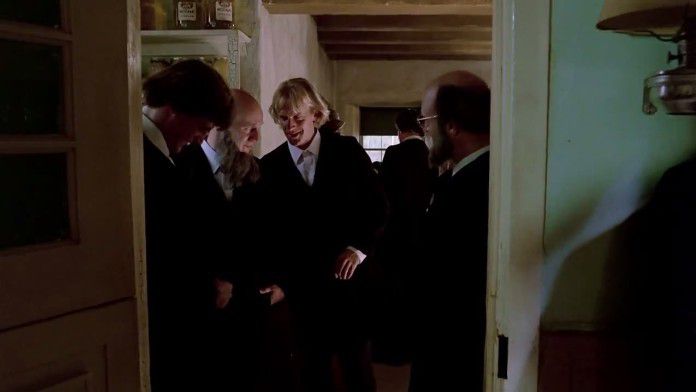 Makes an inappropriate joke about the dead man (I believe) in his own house on the day of his burial. And tells the widow the Amish equivalant to "If you need anything, I'm here."

One thing that point in the direction of a murder is how Rachel never betrays any sign of grief during the whole film. She doesn’t care about her husband’s death nor does it make her think that she should refrain from jumping on the first handsome man around.

Also, when going to Rachel, Daniel checks whether he is observed by anybody as if he was worried someone might suddenly accuse him of something. I can’t remember the literal reason why Rachel brings Samuel to the city but everything looks as if she wanted him to witness the murder. She lets him roam around without supervision when she knows that it’s actually pretty dangerous for a naïve little Amish boy.

She doesn’t want her son to remain an Amish all his life. She wants him to be tempted by the city and also to witness the fact that human beings are amoral, not essentially innocent, that the Amish community is fake; which is why his trip to the city can be metaphorically summarized by a murder.

As soon as he is taught that human beings can act in an interested manner, he reconstructs another murder: he understands the one of his father. Rachel wants him to, at least, have the tools to understand why she did what she did.

When Samuel and Rachel sleep at Elaine's place, the woman utters a “oh” of compassion when she learns that they are Amish. Book’s sister is presented as a woman with a lively sex life and she certainly feels sad for Rachel (which she should). 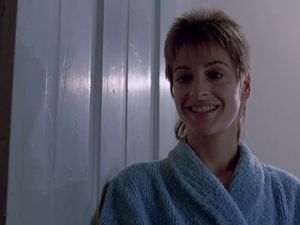 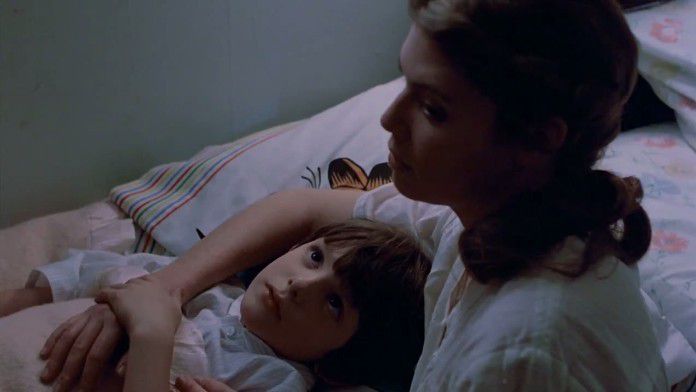 Also, John’s sister has short hair. Short haired woman in a movie = there’s a repressed homosexual man around (Ghost, Cliffhanger, Jason Bourne, Point Break). John is scared of women’s libido and tends to be more attracted to the opposite sex. That’s why his sister has short hair (The idea she has of her attractiveness is influenced by her brother’s taste) and why he judges her when he realises that she allows men to visit her when her children are in bed.

So, Daniel and Rachel have murdered Samuel’s father… and… shit. I wanted this to be short.

John Book is Samuel. The detective who has to deal with the case is actually a metaphor of the child who gets to realise that her mother murdered her father. This makes everything a lot more complex than I thought.

The story could thus entirely be about a woman who wants her boy to escape the Amish community.

But let’s go back and simply say what I wanted to say in this article in the first place.

As John Book is wounded and has to stay in the Amish community, Rachel’s attraction to him becomes stronger and more difficult to contain. More, the man represents an unexpected hope of fleeing from the community.

Daniel can easily be mistaken for a man in love with Rachel, which he is not. He doesn’t become a rival to John. He becomes a rival to Rachel. Both outcasts are going to try their best to seduce the cop from the outside world. 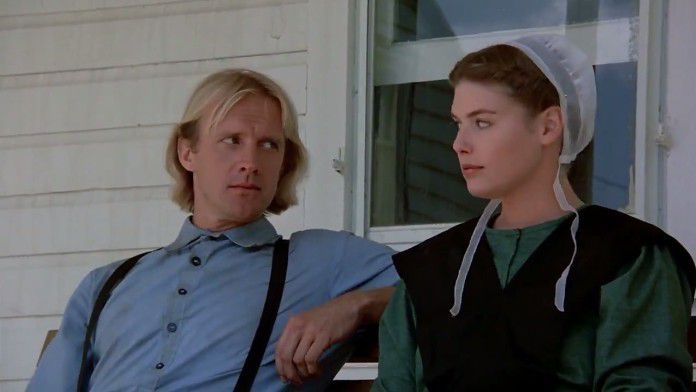 Daniel : "So, shall we move on to the second part of our scheme ?" Rachel : "I've found a better opportunity to escape this miserable life." Daniel : "Of course? The cop from the big city." 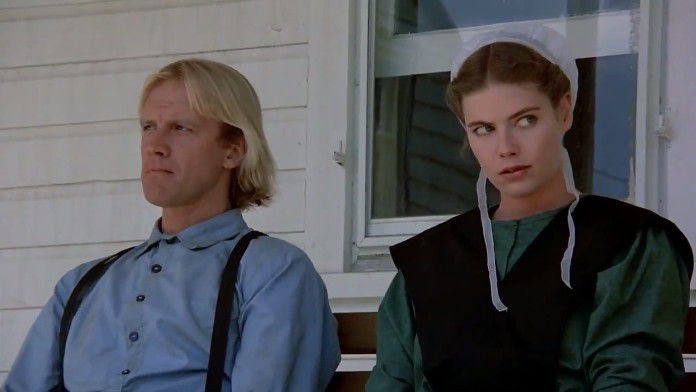 Rachel and John’s attraction for each other doesn’t slowly appear, it is there from the first minute and noticeable in every single scene they have together. The problem is that something is keeping John from acting upon his urges.

The important thing here is that, while he won’t break the rules of the community and have sex with Rachel when she offers herself to him naked, he destroys the community’s reputation by beating the crap out of a guy who is bullying Daniel on the following day. 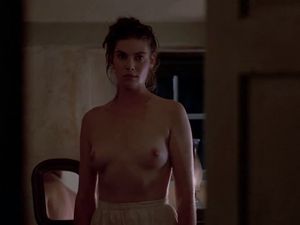 He thus gives the place of his hideout away (because an Amish who kicks someone's ass is sure to be talked about). And he phones the bad guy. And he violently threatens a lady who wants to take a picture of him as if this random picture was more likely to help the bad guys find him than his aggressive behaviour.

After Rachel’s bluntest proposition, John totally loses control and screws up everything. More, he repairs the pole he had destroyed with his car which implicitly means that his stay in the Amish community is about to become a closed parenthesis in his life.

The bad guys find him, he kills them and then leaves. The end.

Even when unanalysed, the ending of Witness conveys a feeling of missed opportunity. John neither decides to stay with the Amish nor does he decide to bring Rachel with him to the city. Something went wrong.

So, if we only look at things from the “sexual orientation” point of view, it would mean that John realises that he is more attracted to Daniel than Rachel. This would also explain the last shot of the film when he stops his car while crossing paths with the blond Amish man. There’s no way he could live his love story with the guy in the Amish community, so he attempts at bringing Daniel with him to the city, but the man refuses. Daniel's farewell to John truly looks like a "good riddance" gesture. John stops the car, Daniel sees it but carries on walking.

It could also be that John slowly learns that the Amish are as violent as the city he comes from and decides to leave. The climax of this being his realisation that Rachel killed her husband.

Finally, there’s also the “are you going to shoot the boy ?” moment. When threatened by Schaeffer, John defends himself by pointing at Amish people as potential targets, eventually resorting to Samuel himself (innocence incarnated), in order to break the corrupted cop’s will. Using Samuel this way is pretty cowardly and shocking and maybe, it makes the whole community resent John Book. I hope I'll find the motivation to comment more on this climactic event in another article.

Through this behaviour of his, Rachel and Daniel could also realise that John wasn’t here to protect the boy but to hide, that the Amish’s ways appealed to him because he was scared of going back in a world where his life is threatened. It’s because of this cowardice too, that the partner he's left behind is killed.

Daniel and Rachel, who are pretty strong minded persons end up despising John Book and giving up on any plans they might have had related to him. And that’s funny because the courageous characters who are ready to get their hands dirty for what they believe in are the pseudo non-violent Amishes and the coward who will flee instead of confronting a corrupted hierarchy is the hard-boiled city cop.

Anyway, I’ve talked about what I had planned to talk about, the murder of the husband and the homosexual subtext of the story. I might write another article in order to explore the Samuel/John relationship.