This article is going to be so short that I don’t even know how to write it in order to make it an article.

Simply, as in many other “monster” movies, like Jurassic Park, the monster is actually just an animal. The megalodon looks for food, shelter, can feel threatened, attacked or intrigued and it isn’t driven by any hate or sadism.

…and it wants to reproduce.

I cannot go into details right now because I only saw the movie once in theatres, but truly The Meg is the story of a giant misunderstanding.

Critics complained about the lack of blood and horrifying scenes of people getting torn into pieces by the giant mouth, the problem is that this movie is a bit too intelligent for its own sake. The megalodon doesn’t prey on humans. It doesn’t feed on them because they are too small.

These people actually are mostly safe and that's very courageous of the movie to have done that.

Each time someone is eaten or killed in the movie, there is more going on than it seems. For example, there’s a guy at some point who gets devoured but it’s obvious that the giant shark is only eating a dead whale while the terrified man happens to be trying to climb on the carcass. He just needed to swim away from the dead mammal to escape the Meg.

The movie nicely makes the effort to introduce the megalodon’s apparitions and attacks as normal animalistic reactions.

The nuclear submarine looks like a whale, and several submarines that the main characters  use actually look like underwater animals.

Why would you roam around in a submarine shaped like a shark or a whale ?

The shot where it bites into the glass tunnel of the underwater station as if because it wants to eat the little girl, is explained by the fact that it is attracted by vibrations. She attracted it and it took a bite at the lighted underwater structure. 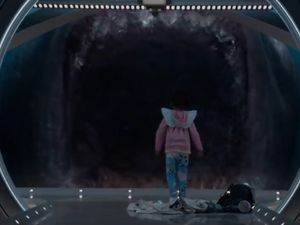 Then, there’s the scene at the beach where the Megalodon gets itself stuck in the chains of the anchor of little platforms and attacks, not the numerous swimmers, but the platforms.

I actually find it pretty courageous and suicidal from the screenwriters to have written such a scene in which the giant creature has the opportunity to make a carnage and simply doesn’t because there’s actually no reason why it would do it.

Finally there’s the moment when it attacks our heroes’ boat just when they think that they’ve killed the giant predator. If you look at the scene, you’ll see that truly the Megalodon is not attacking the crew or the boat, it is catching the carcass of the dead shark to eat it.

Because of the fact that forming a family and having children is a strong topic of the film, I immediately had the feeling that this dead Meg was the female of the one jumping on the boat to take her back from her murderers. It was an act of revenge or grief and didn’t know exactly until I realised it was because that shark was pregnant and the second Meg ate her in order to protect the soon to be born baby Megalodon.

At the end of the movie, we’re given the opportunity to see this little shark escape its father’s carcass through its mouth.

And thus, there’s a third megalodon.

Why avoiding the cliché ending of a new shark appearing underwater and eating the public/camera then ? Because the Meg doesn’t prey on humans and the newborn will probably naturally go at the bottom of the sea or even under the hydrogen sulfide cloud to live its life and nobody will ever hear of its existence.